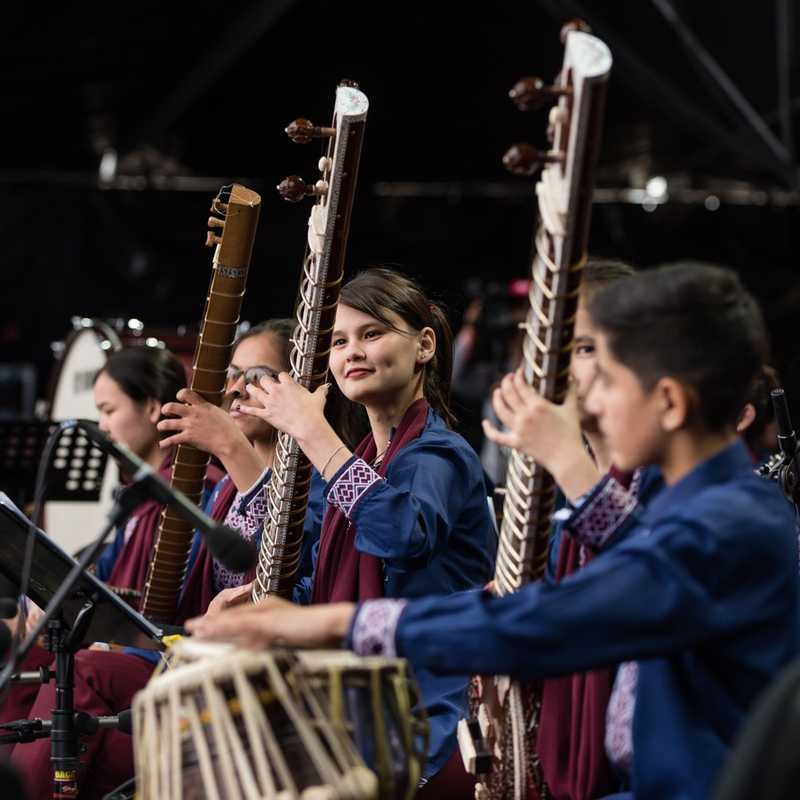 Orchestra from the Land of Silence, a documentary produced by Pohoda, is at international festivals and has also been nominated for film awards.

When the confirmation of Zohra's participation at Pohoda 2019 came, it was decided – instead of the classic documentary about the festival, the team opted for a version that will be dedicated to the brave artists of the first women's orchestra from Afghanistan. Directed by Lucia Kašová the amazing documentary Orchestra from the Land of Silence was created. It captures Zohra at home in Kabul, as well as their journey to Slovakia, where the orchestra played six concerts. The documentary premiered last weekend at DocsMX International Film Festival in Mexico. After this world premiere, an international premiere will be held at the German docx! festival within the Duisburger Filmwoche. The great news is the nomination for the GROSSE KLAPPE Award for the best political documentary for young people. The documentary will also be screened for German students within a video conference. The film is nominated in the 23rd year of the Greek Olympia International Film Festival for Children and Young People, which is part of the European Children’s Film Association (ECFA). In practice, this means that if the documentary succeeds at the festival at the turn of November and December, it will be automatically nominated for the overall ECFA Awards.

On November 8th and 9th, at noon, the attenders of the online version of Jeden svet (One World) festival will also be able to watch the film. The Slovak premiere will also include a discussion entitled "What is the role of music in the struggle for freedom?" Orchestra founder Zohra Ahmad Sarmast, Lucia Kašová, Afghan activist and singer Mozhdah Jamalzadah and Marzia – the main protagonist of the film – will discuss with the host Frederika Halászová. We are planning further film screenings in cinemas and schools in Slovakia as soon as possible.

The director Lucia Kašová said the following about the documentary participation at the festivals and the nominations: “I would like to thank my crew for a fantastic job that grows in such success around the world, the producer of the film Festival Pohoda who, without hesitation, invests in a complicated film project on the other side of the world, just because the idea that Zohra presents is important. My thanks goes to Discosailing for excellent festival strategy that brought the film to audiences abroad. Thank you to the distribution company Film Expanded for giving the film a chance to travel around Slovak schools with a discussion about the principles of freedom and the danger of totalitarianism, which is so important for the Slovak youth and the further direction of our country. This distribution is possible thanks to the Norwegian Active Citizen Fund. I am grateful for having been given the opportunity to be a part of this film.”

"When we travel abroad, we always want to show different Afghanistan that you don't normally see in the media, and that we are all proud of: Afghanistan with many positive changes. One of them is the establishment of a women's orchestra in a country where music was completely banned. With your presence, we are celebrating here the joint return of music to Afghanistan," said Dr. Ahmad Sarmast – the founder of the Afghan women's orchestra Zohra at last year's Pohoda. The very existence and activities of the orchestra are a symbol of the struggle for women's rights, a symbol of heroism, determination and freedom. And it is the desire for freedom, both artistic and human, that is the leitmotif of the documentary Orchestra from the Land of Silence.

"A good Muslim does not make music." This is something Marzia is told by her father when she is growing up. She is a young violinist, through whom we watch the everyday reality of girls behind the high walls of a boarding music school. We see their ordinary days, desires and dreams, preparation for the performance and the tour itself in Slovakia and at Pohoda 2019. Young musicians play for thousands of enthusiastic people at the summer festival, the square and the church. During a trip to Devín Castle, they look at the borders of the former Iron Curtain and hear about times when freedom was absent. Thanks to the Zohra project, girls can develop their talent, study and perform all over the world. At school, they are led to change the mentality of their country and, after graduation, return to their homeland and educate the next generation in the ideals of democracy, freedom and equality. The dilemmas the young musicians face are difficult to imagine, even at home they often face pressure from their families, who are constantly threatened by the Taliban. All the more admirable is Marzia's determination to say: "Music means life to me."

The film Orchestra of the Land of Silence has been selected for the following world festivals so far:

More info about the orchestra: