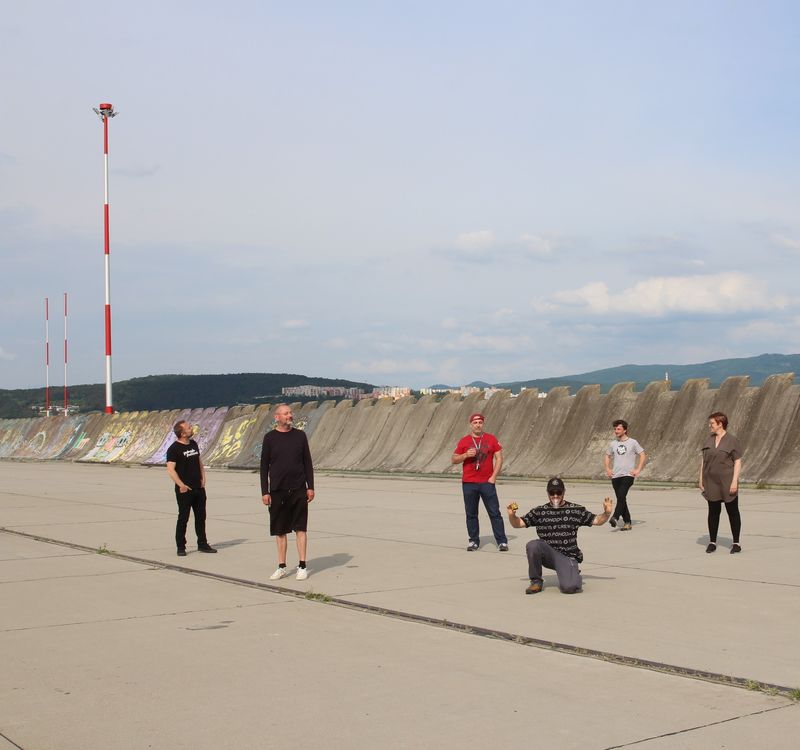 We have announced the Pohoda in the Air program

We are announcing the Pohoda in the Air programme. It features over 50 slots, out of which 31 will be concerts, starting on Thursday and lasting until the Welcoming of the Sun on Sunday morning. The core will consist of a live broadcast from Trenčín Airport and its interesting locations that are not commonly available to Pohoda visitors, such as the airport tower and its roof, the old military equipment, the hangar, and the fire tank. In addition, artists from all over the world will perform special concerts at the festival, while all five inhabited continents will be represented.

The opening day will begin with the concert of ZOHRA, the Afghan women's orchestra from Kabul, followed by Milan Lasica and Dorota Nvotová's performance at the Trenčín Airport. The musical opening on Friday will be the concert of the exceptional The Tap Tap band that will be joined by Radoslav Piovarči of EnKnapGroup in his kilometer dance on the empty airport runway. Band Veľká Potreba will present their debut generational album; the discovery of the Greek music scene Marina Satti & Fonés, will play from Athens; Raptor Koch will introduce their seventeenth album. The romantics from Billy Barman will have their Slovak release of their new album. The extraordinary creativity in music and also in the creation of musical instruments will be shown by music fighters from slums of Kinshasa – the Congolese band Fulu Miziki. After seventeen long years of hibernation, the electronic-wind orchestra Neuropa will play live, followed by the great band Shht from Belgium and the from on their bus the Bazzookas from the Netherlands. Band Luvver will play very well with the emptiness & lights of the airport. The only stage at the airport will be Garage stage, symbolically built on the site of the main stage. After midnight, this will be the place of concerts of great metal bands as Besnaand 7 minút strachu. Nina Pixel will play her set in the area of decommissioned military equipment.

Saturday will be opened by the only public concert of the festival—on the Trenčín main square, The Chamber Orchestra of the City of Trenčín will perform in the world premiere works by Vrbovskí víťazi in arrangements of Slavo Solovic. Stroon will play his new album on the roof of the airport tower, and Hungarian-Slovak band Drť will present their debut album Puntičkár on a discarded radar. Top rappers Čavalenky and Gleb will meet in one set. The festival favourite Ventolin will play and dance a romantic concert at sunset, and the outsider American star Space Lady will send her work and audio-visual greeting from the 7,000-people town of La Junta. A surprising concept will be delivered by Midi Lidi, and Iranian singer Liraz will deliver a beautiful concert from Tel Aviv. Blikajúci orchester (loosely translated as Blinking Orchestra) will play with lights and the airport runway, and Donny Benét will present his new album from Sydney. The line-up after midnight will again belong to the harder genre and electronics. The overwhelming electronic Tittingur will play in premiere their album Epiphany, and the Czech duo Oliver Torr & OGJ will present their analogue mastery. The best local punk band The Wilderness and completely new faces of the Slovak scene, band Haďáci, will perform on the Garage stage. The elusive DJ Džbán will take you around the world in 8 songs performed in a hot-air balloon. The musical highlight and, at the same time, also the closing act of Pohoda in the Air will be Welcoming the Sun with the Kronos Quartet. Thanks to their geographical location and time difference, viewers will see both the sunrise over the Trenčín Castle and the sunset in San Francisco.

In addition to music, Pohoda in the Air will offer several debates, performances, literature, film, and visual arts. The festival will use the various areas of the airport, installations, and also an airplane and a hot-air balloon for these activities.

We will present in preview the documentary Orchestra from the Land of Silence about the Slovak tour of the ZOHRA orchestra, which will lead into a debate of Frederika Halászová, the documentary director Lucia Kašová, and ombudswoman Mária Patakyová. A debate of Mário Šmýkal with Lukáš Filo and Michal Kaščák will take place in a hot-air balloon. Frederika Halászová will talk to Eva Mosnáková in the empty Trenčín synagogue. We are also preparing interesting scientific debates featuring astrophysicist Norbert Werner, founder of the Vedatour platform Samuel Kováčik, and scientist Pavol Čekan. Paula Valová and Jozef Pecho will talk about the influence of the climate, ranging from the specific area of the festival to its global dimension, in a debate with Ladislav Miko. Ilona Németh, Jana Močková, Štefan Polakovič, Olja Triaška, and Paľo Čejka will reflect on what culture is here for. Psychologists Mária Tóthová Šimčáková and Marek Madro will appear in further discussions, moderated by Zuzana Kovačič Hanzelová, Andrea Ungvölgyi, and Štefan Hríb. Hesso Jašterák will wrap up the Friday night with a divination from the memory game cards. The festival will end directly in the air with a debate on spiritual topics: the pilot and at the same time moderator Whisky will “shrive” Daniel Pastirčák and Míša Kapustin on Sunday (non)sermon show.

Visual art will have an exceptional space at the Pohoda in the Air festival. In cooperation with the Slovak National Gallery, we are installing Stano Filko's work The Celebrating of Air – Breathing in the centre of the airport; Greeting for Bruce Neumann by Ilona Németh will be based on the empty runway. Several performers will appear in the main broadcast: Emília Rigová, Martin Toldy & Eleonóra Stanková, Martin Piaček & Matej Kaminský,  András Csefalvaý, Dano Dida, Oto Hudec, Peter Kalmus, Gabriel Sebö, and Tereza Maco. As part of the Trenčín Hall program, we will see performances of Katarína Karafová & Michal Huštáty, Gabriela Zigová & Lucia Kotvanová, Petra Fornayová & Vlado Zboroň, Viktor Fuček & Natália Okolicsányiová, Rudolf and Róbert Szilágy from Romania, Danish-Austrian duo Mads Floor Andersen & Sara Lanner, and Viktória Monhor & Zoltán Balla from Hungary. The Flag of the Earth by Otto Hudec will be installed on the main square in Trenčín, and the Wandering Gallery will also appear in the city centre.

Literature will also be represented. Authors Balla, Vlado Janček, and Laco Kerata will be introduced in the KK Bagala Literary Circus, and reading will be performed by Zuzana Fialová and Robo Roth. Literaptura will have FCVK KVLT, Fejbs, Modré hory, Idea, and Strýček Nicholas. Jakub Jošt and Oliver Rehák will play three chess-literary-philosophical games with Ján Markoš.

The festival will take place without the direct participation of visitors; we are working on the opportunity for one winner to land at the airport in a tandem jump from the plane. Also, three selected visitors will be able to play at Pohoda in the Air during the Welcoming the Sun on Saturday morning. Viewers are invited to send us 20-second videos of watching Pohoda in the Air. We will make a montage of the best ones and their directors will also be rewarded with a ticket to Pohoda 2021. The program of Smokeless Zone 18+ will run in parallel streams on Friday and Saturday, and it will include workshops, talk shows, and “stories” of well-known comedians moderated by Vera Wisterová and Marcel Forgáč. In addition, there will be other parallel programs, including panorama views and broadcast of the lives of year-round residents of the airport.

The festival is free for all spectators, also thanks to our partners, after whom the individual stages are named. The partners also help us with their technical know-how and they connect with the spectators in a creative way. Slovenská sporiteľňa has prepared a special edition of payment cards featuring the Pohoda design, as well as a competition for a hot-air balloon flight over the airport during the festival. Orange will provide the necessary connectivity for the largest streaming marathon in Pohoda's history and will provide its customers with a free monthly “Data-pass”—unlimited data on social networks, so they can watch Pohoda in the Air without interruptions wherever they are in Slovakia. In addition to the debates, the ESET Science stage will also include the installation “In the Core of Knowledge”, which was prepared for the ESET Science Award by a duo of Slovak artists Filip and Ján Šicko.

Kofola has prepared the Voňavé pozdravy (Fragrant greetings) app, thanks to which folks can send Pohoda in the Air postcards to all corners of Slovakia for free. Citroën has prepared a limited edition of C3 Pohoda and C5 Aircross Pohoda and Urpiner offers a limited edition of beer packs including a festival cup, Pohoda In the Air Urpiner Stage Box. Delivery is free of charge, thanks to the cooperation with Zásielkovňa, within all its collection points in Slovakia. CCC is preparing a contest for the most comfortable outfit. Pohoda in the Air will be without visitors, but within three days, hundreds of people will appear at the airport to take part in the technical support of the streaming service or the program itself. The companies Ryba Košice, dm, Rajo, and Julius Meinl will support us with delivering refreshments for them. Literature related activities are supported by the Martinus bookstores, inspiring debates will be part of the festival thanks to the Representation of the European Commission in Slovakia, the Orange Foundation, the ESET Foundation,and Curaprox. The festival is also supported by the city of Trenčín.

You can watch Pohoda in the Air on www.pohodafestival.sk, Pohoda Facebook profile and YouTube channel, as well as in cross-streams of our partners and main media partners .týždeň, Aktuality.sk, and NOIZZ. A selection of concerts will be broadcast live from the Trenčín Airport by RTVS via Rádio_FM.