Slovak artists in Groningen have done marvellous work for the whole scene. Together, they played 22 concerts, each with excellent attendance and strong response. The Ills, Tittingur, Thisnis, Möbius, Nvmeri, Our Stories, Autumnist, Katka Máliková & Ensemble, Vojdi, The Wilderness and Raptor Koch together with DJs and producers B-complex and Isama Zing showed different forms of our music and each performance met the strictest world criteria. "Every year I'm happy to find 3-4 interesting bands. Now we have seen all the concerts of our artists and I can say that each of them was far above average and was received with enthusiasm. It was obvious how responsibly the bands prepared themselves. This is good news for the whole scene, the impression that the thirteen of our representatives managed to make opens door for other musicians from Slovakia, too" says Michal Kaščák, Pohoda’s CEO (the partner of the Slovak focus together with Lala Slovak Music Export) and added: "It was also amazing to see the mutual support and respect. The event filled me with pride in our art and great joy from exceptional selflessness and togetherness. I think we've experienced a turning point." "Honour to have done that with you all. Huge compliments. Deeply impressed. Safe travels and be proud!" – this is a short message from the head of ESNS delivered before the departure of two buses with more than 120 delegates from Groningen.

If Eurosonic was a turning point for Slovak music, it was equally essential for Pohoda festival. In addition to two awards at the European Festival Awards, Pohoda also won the A Greener Festival Award at the ESNS 2019. Along with other award-winning festivals, the members of our production crew accepted the award from the founders of A Greener Festival – Ben Challis, Claire O'Neill and Teresa Moore. Claire said about the award: "This year we noticed unprecedented efforts and awareness of the need for our work and our lives to be more in harmony with nature. Festivals and events, which we had the honour to judge and award, contribute to the formation of this shift, which has positive consequences for the events themselves, and at the same time, they are an example for the world." Eurosonic Noorderslag 2019 was, therefore, undoubtedly the most successful one for Pohoda and Slovakia in history.

In addition to the A Greener Festival Award, Pohoda turned both nominations at EFA 2018 into victories. From Groningen to Slovakia, we’re taking the Take a Stand Award as well as the Award for Excellence and Passion, which the EFA jury awarded to Michal Kaščák for his contribution to the European music scene. In addition, we also succeeded in a "non-music" competition – the Pohoda team won the table football tournament. In the Czech-Slovak finals, Martin "Matwe" Kaščák and Anton Repka beat the excellent female team from the Prague Metronome festival. We also used this non-music activity to promote our music, since we called our team "Come to see Garage". After each winning round, we invited both music professionals and the hosts of the competition to the concerts of Slovak bands at our smallest and cutest stage.

As a matter of fact, we bought the garage in Slovakia, transported it through half of Europe and designed it exactly according to the model of real residential concrete practice rooms. The Garage is also linked to the first achievements of our bands at ESNS 2019. Möbius's concert was attended by the director of the Romanian festival ARTmania, Codruta Vulcu (the festival won the award for the best small festival in Europe). Immediately after the show, Codruta invited this band from Žilina to play at her festival. On the other hand, Thisnis caught the attention of the Seward band agent. This experimental trio might soon present themselves to Barcelona's alternative music fans. 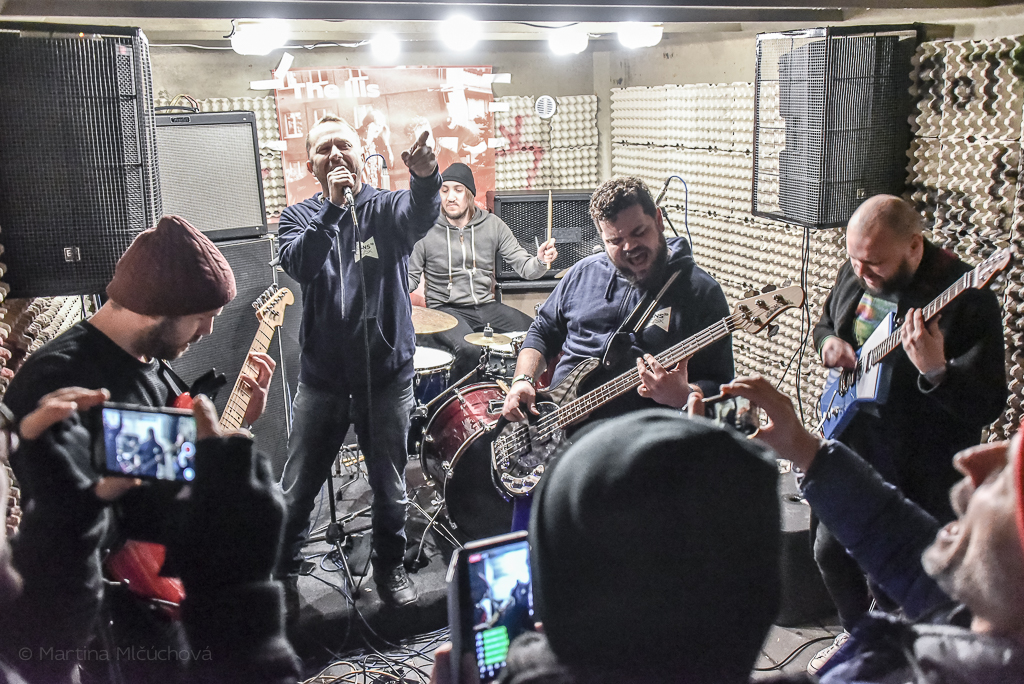 The bonus to the success of our artists was the change of the traditional approach of "success is not forgiven". In Groningen, we saw the exact opposite of this stereotype. The Slovak artists supported one another with equipment, advice on how to attract somebody’s attention, celebrations on the ships, but above all, they were standing in front of the stages of their colleagues – metalheads jumped to D&B, D&B artists enjoyed the indie-rock bands and many swayed to the etheric home world-music of Katka Máliková. Katka & Ensemble also played the last songs for the "tour participants" exclusively acoustically at Grandstande of Ilona Németh. The splendid improvised Slovak close of the ESNS 2019 was attended by the main booker of the Spanish Mad-Cool Festival, or the above mentioned Romanian director of ARTmania, too. We are very pleased that the artists who weren’t part of the Czech and Slovakian focus treated us selflessly. As the rapper Vec tweeted: "If you've ever been to Pohoda festival, you definitely know the Garage stage. The madman brought it to Groningen, rented four ships in which two buses of people from the SK expedition slept. A cultural event of the year 2019 already took place in January." Non-music activities ended up successfully, too – the mentioned Grandstand 6 installation - Groningen greetings for Bruce Nauman by Ilona Németh, or the "Niemand" by Viktor Frešo, standing on the square with the largest concentration of clubs in the Netherlands. Both focus discussions had full attendance and the world premiere of the Ostrov Hudby Film (the Island of Music Film in English) by the director Martina Slováková left a good impression. From yesterday, the film is available online on the director's YouTube channel:

On the way from the Netherlands, thank you messages were being sent to the joint chat of the Slovak expedition and suggestions for an after-party spread around the buses. As our colleague, Suzanne (who, as a native from Belgian Flanders sorted out the most things with the locals for us all), wrote aptly: "This adventure is not over." We're going to have a briefing for the media on Monday morning next week, and in the evening we're inviting you to the Slovak premiere of the Ostrov Hudby Film documentary and the discussion of Denník N to Nová Cvernovka, which will also be attended by the head of the Eurosonic Noorderslag Festival, Ruud Berends. It will then smoothly turn into concerts of several bands that represented Slovakia at the ESNS 2019. Thank you to artists, partners (Urpiner, Slovenská sporiteľňa, Budiš), media partners (DIY, Fullmoon, RTVS, Radio_FM, Týždeň, Denník N, Bittner) LALA Slovak Music Export and their partners (FPU, Creative Europe Desk Slovakia), journalists, photographers, cameramen, production members and all those who helped us with the Czech and Slovak focus at ESNS 2019. We’re looking forward to seeing you on January 28 from 5 p.m. in Nová Cvernovka in Bratislava.

P.S.: Just a while ago, Europavox sent the first "post-eurosonic" newsletter with a section “band of the week”, awarding The Ills from Bratislava with this title, and describing them with the following words: “…my choice must be the post-rock beasts The Ills. The four-piece band from Bratislava makes an irresistible instrumental soundtrack. If you need any further evidence, just listen how they play the song 4:17 live."