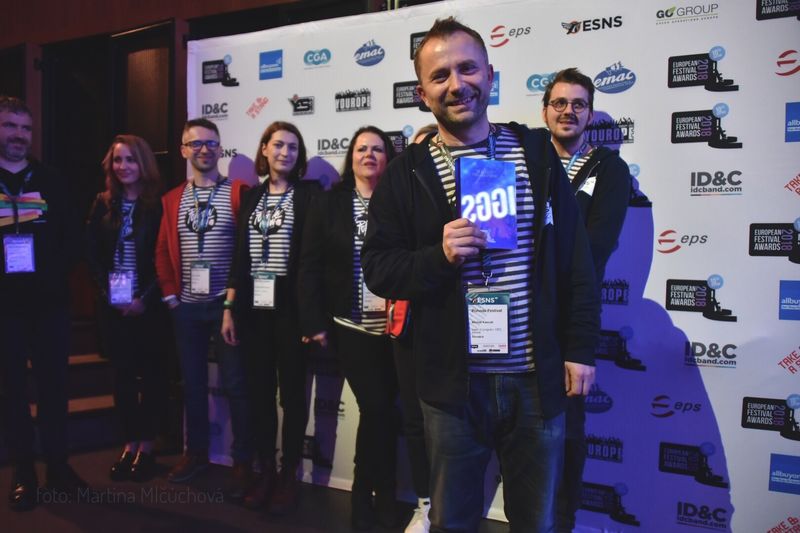 After last year's premiere victory in the most prestigious festival awards, the European Festival Awards, Pohoda turned both nominations in its categories into victories this year. We won the most awards at the EFA 2018 together with the Roskilde festival. From Groningen to Slovakia, we’re taking the Take a Stand Award as well as the Award for Excellence and Passion, which the EFA jury awarded to Michal Kaščák for the contribution to the scene in Slovakia and Europe. "Both awards are symbolic, both of them bring together art and freedom. I consider a free festival a miracle and I think it is natural that we want to use its power to spread tolerance and freedom. It’s also good to see that people in Europe are interested in what is happening in Slovakia," Michal Kaščák said about the awards. Thank you to our attenders, all of our colleagues, and friends. After a great concert delivered by The Ills, keep your fingers crossed for  other artists who will be performing within the Czech and Slovak Focus at ESNS 2019 these days.

Michal Kaščák took the Award for Excellence and Passion from the last year winner’s hands, Fruzsina Szép. In her long introductory speech, she highlighted the way Michal approaches the organization of the festival, hinting to the previous award: "When Michal sees any problem in society, he doesn’t close his eyes before it, but instead puts it in the heart of his festival." Together with Michal, personalities such as Glastonbury’s lawyer Ben Chalis, EXIT Festival director Ivan Milivojev, Yourope boss Philippe Cornu, and Go-group Holger director Jan Schmidt were nominated in this category. The head of the Romanian festival ARTmania Codruta Vulcu, who won the EFA 2018 award for the best small festival, thanked Michal in her speech, saying he is one of the key personalities who influenced her the most. "It's easy to be ‘excellent’ when you have so many excellent people around you. It's easy to have passion for something as amazing as music. I consider the award to be the recognition of Pohoda, its charm wouldn’t work without our attenders, who give it meaning," said Michal Kaščák.

Take a Stand Award was presented to Pohoda by the European Commissioner for Education, Culture, Youth and Sport, Tibor Navracsics, who praised the extraordinary commitment to freedom and sense of social responsibility outside the festival stages as well. This was the second year of the award, with Pohoda having been nominated last year for the installation of Minaret, which, except for Pohoda, appeared also at the neighbouring Sziget. This year, the jury appreciated the long-term approach of the festival to sensitive social issues, especially the reaction to the tragedy of February last year – the murder of the journalist Ján Kuciak and his fiancé Martina Kušnírová. In addition to concerts for Ján and Martina in Bratislava, Prešov, Žilina, Nitra, Košice, Pezinok and Gregorovce, Pohoda also responded to this unprecedented attack on freedom during the 22nd edition of the festival. Michal explained our efforts after the first concert with the following words: "Independent art needs the freedom for its existence, and Martina and Ján died for it." The opening concert of the festival, the winning installation of the Public art festival contest and the initiative of visual artists called Reaction was dedicated to the couple. The artistic peak was, however, the world premiere of The Quartet of Tentacles Reaching Out by the young Slovak composer Miro Tóth, which was delivered by the world-famous Kronos Quartet string quartet. We also remembered Ján and Martina with the symbolic gate “They united us”, the name of which was also the main message that came from the stage at the European Festival Awards.