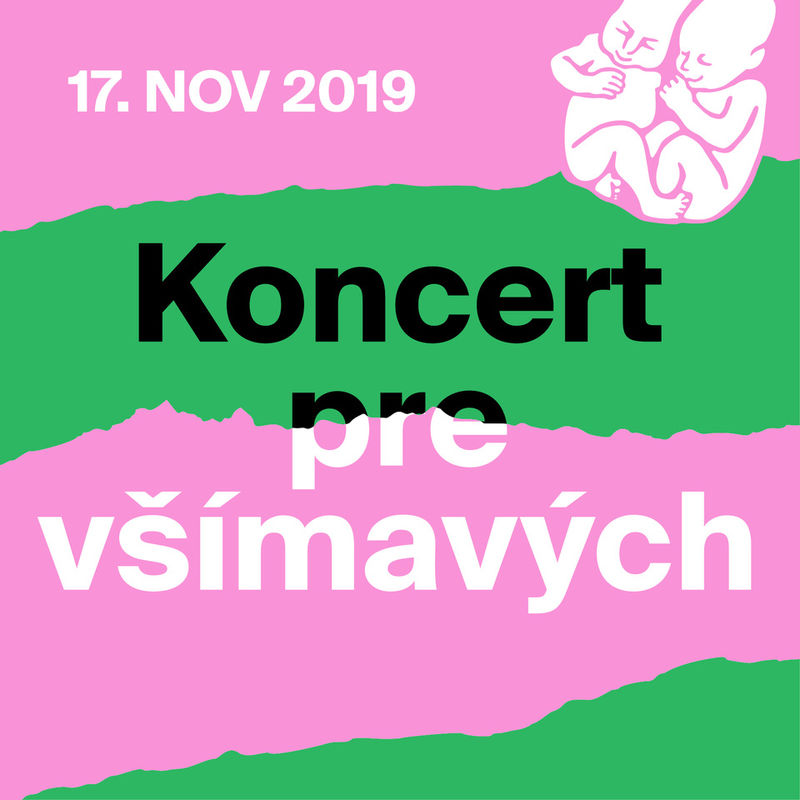 Concert for the Attentive in Umelka and Fuga on November 17

The eleventh edition of the Concert for the Attentive is moving to two exceptional venues: Umelka Gallery will host Bez ladu a skladu and Ještě jsme se nedohodli, and the club Fuga will host Chór vážskych muzikantov, The Wilderness and a world premiere of the Slovakian-Hungarian project titled Drť (Fragments). Admission fee to Umelka is 15€, to Fuga 9€ and a combo ticket to both venues, Umelka and Fuga, is priced at 19€.

These two venues were selected on purpose. On Sunday, November 19, 1989, approximately five hundred artists, intellectuals and public figures gathered in Bratislava’s Umelka in reaction to the Prague events from November 17. This gathering led to the establishment of VPN. The meeting was initiated by Rudo Sikora, who had an exhibition in Umelka in November ‘89. This year, Umelka is staging an exhibition of his work again. Together with Ilona Németh and leaders of Stojíme pri kultúre initiative (Standing by the Culture) – Nina Vidovencová and Stano Krajči – he will be discussing the topic of the importance of arts in society. The fact that a free club such as Fuga exists, is a significant result of the 1989 movement. This club is an important center of liberal arts in the heart of Bratislava. Besides bands, an important figure of the Gentle Revolution, Fedor Gál, will take the stage there.

Ještě jsme se nedohodli will open the Concert for the Attentive at Umelka. These representatives of the so-called Brno new wave started out in the 1980s doing a one-time performance for a joke, but they soon took the alternative scene by the storm: not only thanks to ignoring bureaucratic obstacles whose purpose was for the regime to control who said what, how and to whom, but, most of all, thanks to their ability to make quirky music with unusual lyrics. If today’s fans of alternative music scene and of bands such as Black Midi want to see the 30-year-old roots of this genre, they shoudn’t miss out on this exceptional concert.

The next band to play will be Bez ladu a skladu from Trenčín, who are coming back to Bratislava after four years. Before 1989, they mostly played in Czech alternative clubs. They couldn’t release their albums officially until after 1989. In 2009, The New York Times named them one of the bands that “poked at the Iron Curtain”.

The event at Fuga will start with a gig by the underground band Chór vážskych muzikantov (a.k.a. CHVM). Thanks to the band, Trenčín became the center of Slovakian alternative scene. They helped many bands, including Bez ladu a skladu. Ľuboš Dzúrik with his Fukkavica Records was distributing underground recordings across Slovakia.

The Wilderness – real evidence that punk at its best is not dead – will be performing next. Brilliant lyrics, excellent music and uncompromising attitudes are the reasons why The Wilderness rank among the principal bands on the Slovakian music scene.

The Concert for the Attentive will be concluded with a world premiere of the Slovakian-Hungarian project Drť (Fragments). The author of the project is Miro Tóth, a music composer well-known also thanks to his collab with The Kronos Quartet. Apart from him, other well-known musicians form part of the project as well: Lucia Chuťková, Marek Buranovský (Vojdi), Márton Csernovszky (The Best Bad Trip), Áron Porteleki (Thisnis) and Michal Kaščák (Bez ladu a skladu). Their songs represent a poeticized musicalized version of a conversation with the former head of State Security, Alojz Lorenc. Marek Kundlák took care of song stylization. The event will also feature the release of album Puntičkár (Hairsplitter) dedicated to the victims of persecutions, repressions and murders committed by the Communist regime.