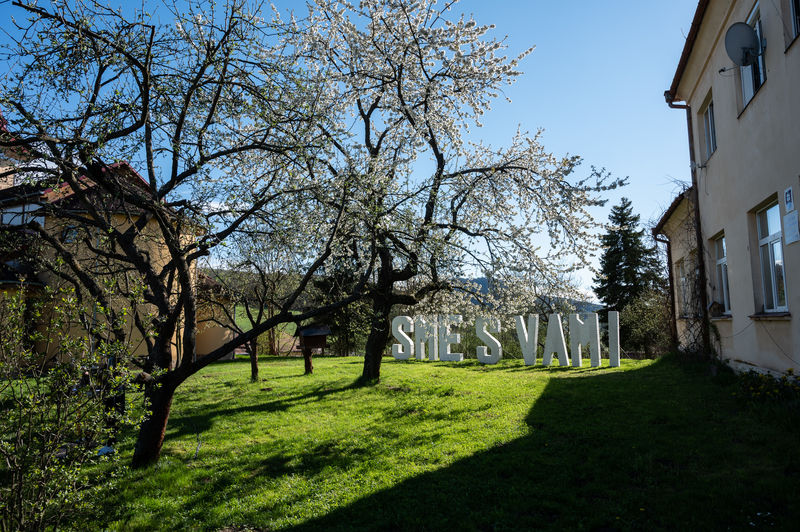 Concert for Martina and Ján in Gregorovce again live

Already this Saturday, the 7th of May 2022, will be held a Concert for Martina and Ján in the area of the Primary School in Gregorovce. From the far Iceland, the stars of the indietronic genre, band múm, will play a live soundtrack to the cult silent film from the 1930s, Menschen am Sonntag. We will also see performance of Nina Kohout, last year’s winner of the Radio_Head Awards in the Discovery of the Year category.

And after two years of online, the concert for Martina and Ján will finally be with visitors. A small stage for the two exceptional concerts will be created in a symbolic place in the centre of the Gregorovce in the area of the primary school. The event will also include art installation SME S VAMI by Michal Kačmár, as well as a debate entitled Zápas o slušné Slovensko (A Struggle for a Decent Slovakia). Zuzana Wienk will host a discussion with Zlatica Kušnírová, Jozef Kuciak, investigator Martin Juhás and former Kuciak team leader Peter Juhás.

“In May 2018, Martina Kušnírová and Ján Kuciak were to unite two families into one with their wedding. Unfortunately, this did not happen, but their legacy united many people who care about our country. I believe that many will come to Gregorovce this Saturday – first of all to express fellowship with the families of Martina and Ján, and also to see the wonderful performances of the Icelandic múm and our Nina Kohout,” said Michal Kaščák about the event.

In case of bad weather, the concert will take place in the multi-purpose hall of the Gregorovce Municipal Office.The live stream of the concert for Martina and Ján will again be provided by Filma.

Admission to the event is free.

The Icelandic band múm plays dreamy music oscillating between the indietronica and glitch pop genres. At the turn of the millennium, they became popular with their great albums Yesterday Was Dramatic – Today Is OK and Finally We Are No One. They are coming to Gregorovce with a special project that includes providing sound the cult German silent film Menschen am Sonntag. The film, cast by non-actors, shows a wonderful poetics of the weekend before Hitler came to power. Gunnar Örn Tynes and Örvar Smárason musicalized also other centuries-old cinematographic legends, such as Nosferatu: A Symphony of Horror and Battleship Potemkin, but they love most the “People on Sunday” (Menschen am Sonntag). Örvar Smárason explains: “The film has it all—a vivid portrait of our beloved Berlin, the spontaneity of youth, the rawness and experimentation of the bold pioneers of the film, who did things their way. Add a simple everyday story and human sexuality with a strong political undertone.” The band used to play the music for the film with various musicians as part of regular improvisation evenings in Reykjavík. They subsequently brought its more settled version on tour in Europe and performed several times also in the German capital during the Berlinale festival. The recordings from Berlin became part of the Blu-ray release of the film produced by the British Film Institute.

Nina Kohout, a singer originating in Trenčín, studies at the prestigious London music school The BRIT School that helped form also Adele and Amy Winehouse. Last year she won the title the Discovery of the Year at the Radio Head Awards and at the beginning of this year she released her debut EP Pandemonium with excellent reviews. Just a few days ago, she opened a series of concerts by the Israeli band Lola Marsh with her emotional performances and will also perform at Concert for Martina and Ján in Gregorovce.

Concert for Martina and Ján in Gregorovce is a part of the project Keeping up freedom which benefits from a grant from Iceland, Liechtenstein and Norway through the EEA Grants. The project has been co-financed from the State Budget of the Slovak Republic.