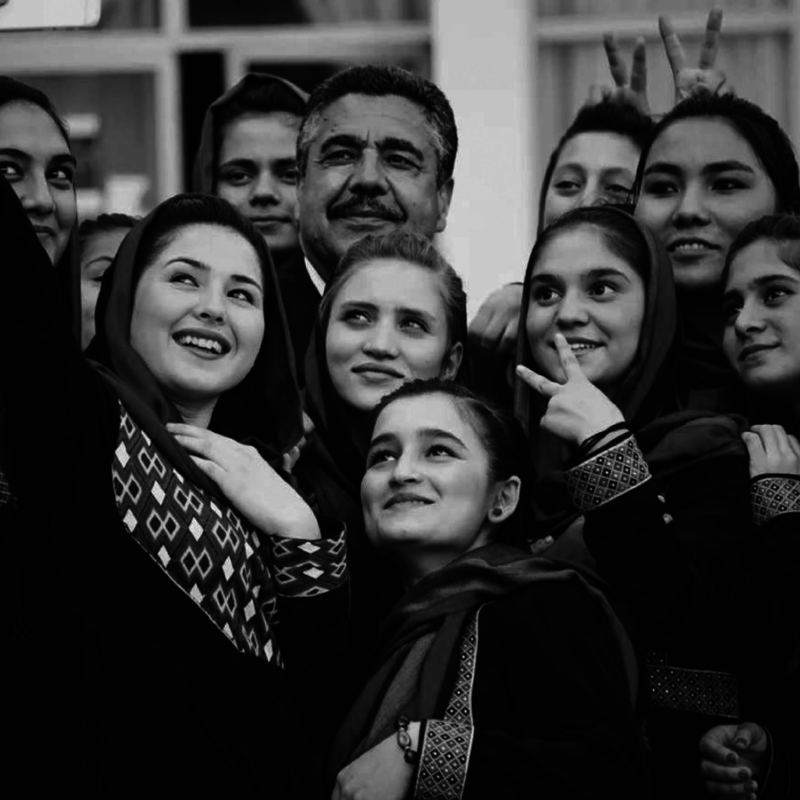 The opening day of the Pohoda in the Air festival will also include the first Afghan women's orchestra—Zohra, which excelled at Pohoda 2019. As there are strict measures in place in the country, the orchestra will not play together, but several of its members have sent us their musical greetings. Their last yearʼs concert and the following Slovakia tour perhaps best illustrated the importance of freedom for art as well as the contribution of art to freedom. That is why, instead of the classic documentary about Pohoda, we made the film Orchestra from the Land of Silence. Film director Lucia Kašová shot it at the concerts of the orchestra. You can watch the concert of Zohra, the documentary, as well as the subsequent discussion on the topic of freedom, human rights, and gender equality in Afghanistan already on Thursday evening.

"The Afghan Women Orchestra – Ensemble Zohra was brought to my attention by my colleague Alžbeta, and I immediately knew that we had artists for a Saturday celebratory concert. It is a real celebration of music and freedom, all musicians and their team deserve admiration and respect. It’s one of the most logistically difficult realization in the history of Pohoda, but it’s worth it. We are also preparing several concerts outside the festival for Zohra, and we want to introduce these great brave musicians to other cities in Slovakia, too,”said Michal Kaščák about the booking.

The Zohra Orchestra is a leading ensemble within the Afghanistan National Institute of Music. Its founder Dr. Ahmad Sarmast is the son of the first Afghan conductor and the first Afghan to earn a PhD in music education. After returning to his home country, he founded the Afghanistan National Institute of Music (ANIM) under the jurisdiction of the Ministry of Education. However, we’re not talking about a private school for prominent people. Up to half of the Institute's students are girls, orphans and children from the streets. His intention does not only meet support and recognition in his native country. Dr. Ahmad Sarmast is constantly confronted with threats. Unfortunately, it went beyond them. In 2014 he was enjoying the performance of his students in the Kabul Cultural Centre, when a suicide bomber detonated a few rows behind him. Ahmad, who was the primary target of the attack, survived only miraculously, as at that time he reached down for his mobile phone to read a text message he’d just received. He lost hearing in one of the ears, but after several operations in Australia (where he had shrapnels removed from his head), he returned home after three months to continue in his work.

In the same year, a young female trumpet player named Meena came to him with an unusual request. Together with her friends, they wanted to create a purely female independent ensemble. They wanted to play music in their own way, to create a specific style and repertoire. As one of the ANIM's primary goals is to educate girls, the boss was thrilled with the idea. The very first purely female music group in Afghanistan's history was born and it was named after the Persian goddess of music – Zohra. Ahmad admits that he was expecting for the project to have a few girls, but today it has over 30 members who rehearse twice a week (or more intensely before the shows). Girls play in the ensemble since the sixth form, while older students help with the development of younger musicians. The repertoire consists of works by Afghan and Western authors. In addition to the "European instruments", the instrumentation is richly represented by instruments typical of South Asia such as sitar, rubab or tabla. The existence of the ensemble (associated with memebers’ joy from playing) is a demonstration of how many things have changed thanks to the brave people in Afghanistan. And it’s also a demonstration of what young girls can do when they’re not afraid to follow their dreams and get the chance to make use of their skills. The formation of the ensemble Zohra has inspired young Afghan women to become the first female conductors in the history of Afghanistan. These brave young women serve as role models for fellow ANIM students and girls throughout the nation, and this leadership has fostered national and international attention in identifying a young females role within todays Afghan society.

The orchestra recorded part of the album "The Rosegarden of Light," which was released by the British Toccata Classics and distributed by Naxos. Their records were played by the BBC, the London Symphony Orchestra's official station, US radio stations and special podcasts across the whole Europe. In addition to their concert in Davos, they also performed in other Swiss and German cities. The Berlin concert took place only a month after the terrorist attack at the local Christmas market, and the girls dedicated it to the victims. Beethoven's Ode to Joy was also part of the repertoire. "Afghanistan should move on the same path as every other nation does, and our girls should also enjoy the freedom that other girls are enjoying outside Afghanistan," said Ahmad Sarmast, the founder of the school and the ensemble, in an interview for NPR, adding: “We can't build a democratic society in Afghanistan if we are neglecting half of the population of this nation.” Today, in addition to transforming the lives of many of her friends, the inspiring idea of ​​a young woman also positively affects the international perception of her native country and improves awareness of women's rights. We are glad that the young brave women will once again share with us a varied mix of Afghan and Western classical music also as part of the Pohoda in the Air festival.