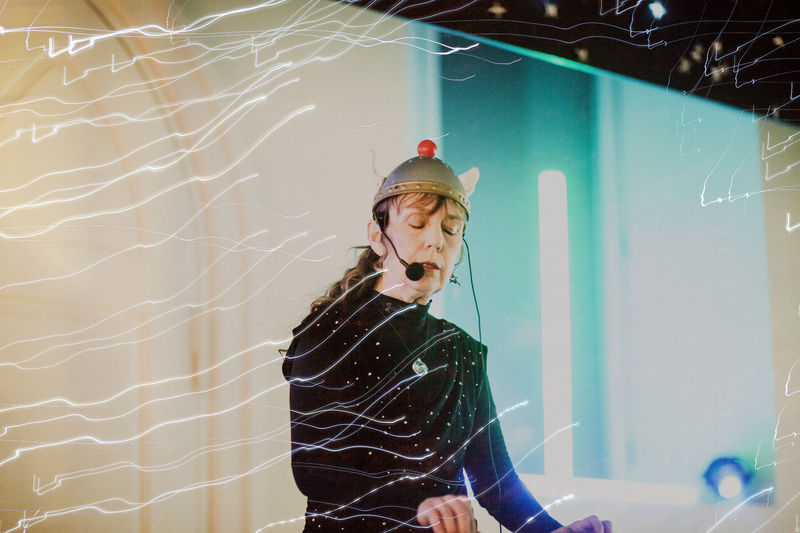 The Space Lady US

Pohoda 2022 will also see the living legend of outsider music, The Space Lady. The Guardian mentions her album The Space Lady’s Greatest Hits in their selection of “The 101 Strangest Records on Spotify” and NME in their list of “101 Album to Hear Before You Die”. Our Graphic Design and curator, Tereza Maco, discovered The Space Lady for us and says the following about the booking: “The Space Lady should become a guilty pleasure of all terrestrial beings as she has long dominated the space mainstream with her passion and battery-powered Casio.”

The Space Lady started her music odyssey at the end of the 1970s. Playing pop songs on a half-broken piano accordion, she was spreading the message of love and pacifism on the streets of Boston. Ten years later, she moved to the center of American idealism – San Francisco. After someone stole and broke her accordion here, she invested in keys Casio, a phase shifter effect and Madonna headset microphone by which she brought an unusual element to popular music performance. The popular busker crossed the streets of San Francisco at the beginning of the millennium when publicist Irwin Chusin listed her in the compilation of “outsider music” Songs In The Key Of Z. Since then, her cult has been constantly growing.

In 2004, she released album Street-Level Superstar and, in 2013, a re-edition of her record The Space Lady’s Greatest Hits, which was listed in Vice’s “Top 50 Albums of 2013” (and also in the above-mentioned selections by NME and The Guardian). Many concerts across Europe and The States followed, including performances at festivals such as Flow Festival, Donaufestival or Le Guess Who. According to The Quietus, her “music has transcended genre, style and fashion, opening up hearts and minds along the way.” Dazed Digitalpoints out that the album “attends to the fact that you don’t need ego and fancy gear to make great pop music.” The Space Lady isn’t loafing around in her seventies either: in 2018, she released album On the Street of Dreams. The top representative of the space hippies (or the forever young child of comets if you will) will come to please visitors at the 24th edition of Pohoda with her music and extraordinary performance.