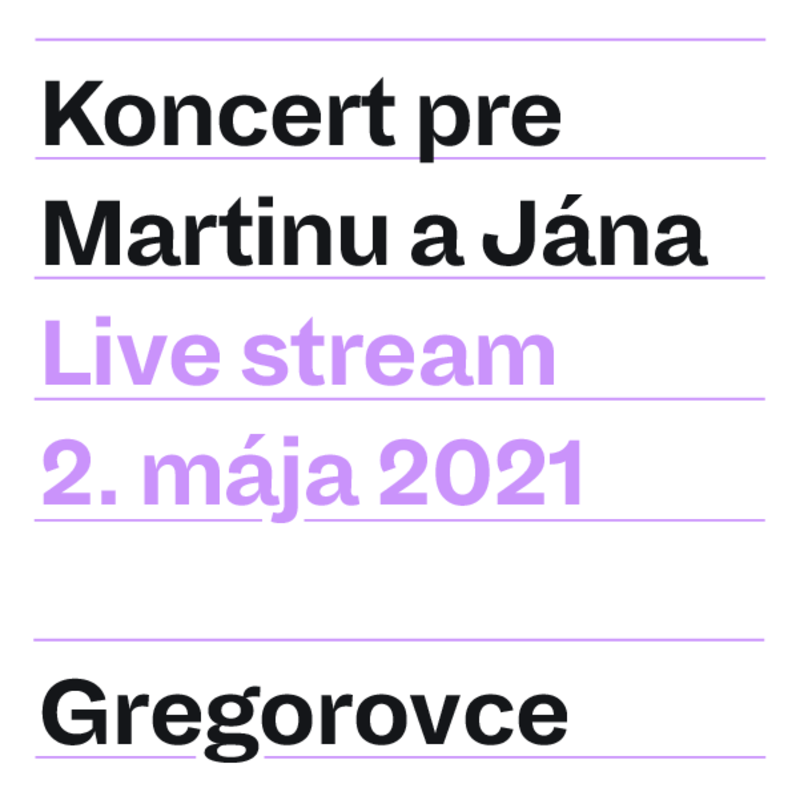 Online concert for Martina and Ján from Gregorovice

This Sunday, May 2, 2021, the Pohoda festival will prepare an online Concert for Martina and Ján in cooperation with the municipality of Gregorovce. Due to the current measures, it will be non-public, but you can watch it on live stream on the Facebook profile of Pohoda or on the profiles of Denník N, N-kultúra, Aktuality.sk, NOIZZ.sk, týždeň.sk and Hudba.sk. This year's concert will take place in the Primary School in Gregorovce that Martina Kušnírová attended. Guitarist and composer David Kollar will present his latest project Sonic Pulses live and the songwriter Nina Rosa will perform as well. The event will also include an installation by Michal Kačmár, as well as two discussions. Frederika Halászová will talk to Dana Marková about the life of Martina Kušnírová and Martin Staňo will talk to Martina Kušnírová's lawyer Roman Kvasnica and journalist Pavla Holcová.

"It’s the same as in previous years. The main message of the concert is togetherness with the families of Martina Kušnírová and Ján Kuciak. Free art needs freedom for its existence, and Martina and Ján died defending this freedom. The concert held on the day of their planned wedding has the symbolism of the meeting – on that day they were to unite two families. We believe that the event and the legacy of Martina and Ján will unite many people who care about our country," said Michal Kaščák about the planned concert.

David Kollar is a Slovak guitarist and composer, the laureate of the National Film Music Award and the Radio_Head Awards for the Contribution to Music. He is famous for his unique approach to guitar, improvisation and composition, which is confirmed on the latest album Sonic Pulses live. The editor of the Czech music website Jazzport, Jan Hocek, writes the following about the songs: "They will penetrate you through all the pores of your body, shake you, fill you with humility and defiance, heal and rouse you." Kollar’s compositions will be enriched with the video projections by Zdeno Hlinka, and Tomáš Mutina will take care of live sampling on a modular synthesizer.

Nina Marinová is a Slovak composer, violinist and singer living in Prague and performing under the pseudonym Nina Rosa. She already performed at Pohoda in 2018 with the project of the same name, and a year later released her debut Discovery which earned her three nominations for the Radio_Head Awards. She composes songs in various languages ​​and, together with the band, offers an unusual combination of world music, swing, folk and reggae.

The live stream of the concert for Martina and Ján will be provided by Filma again.